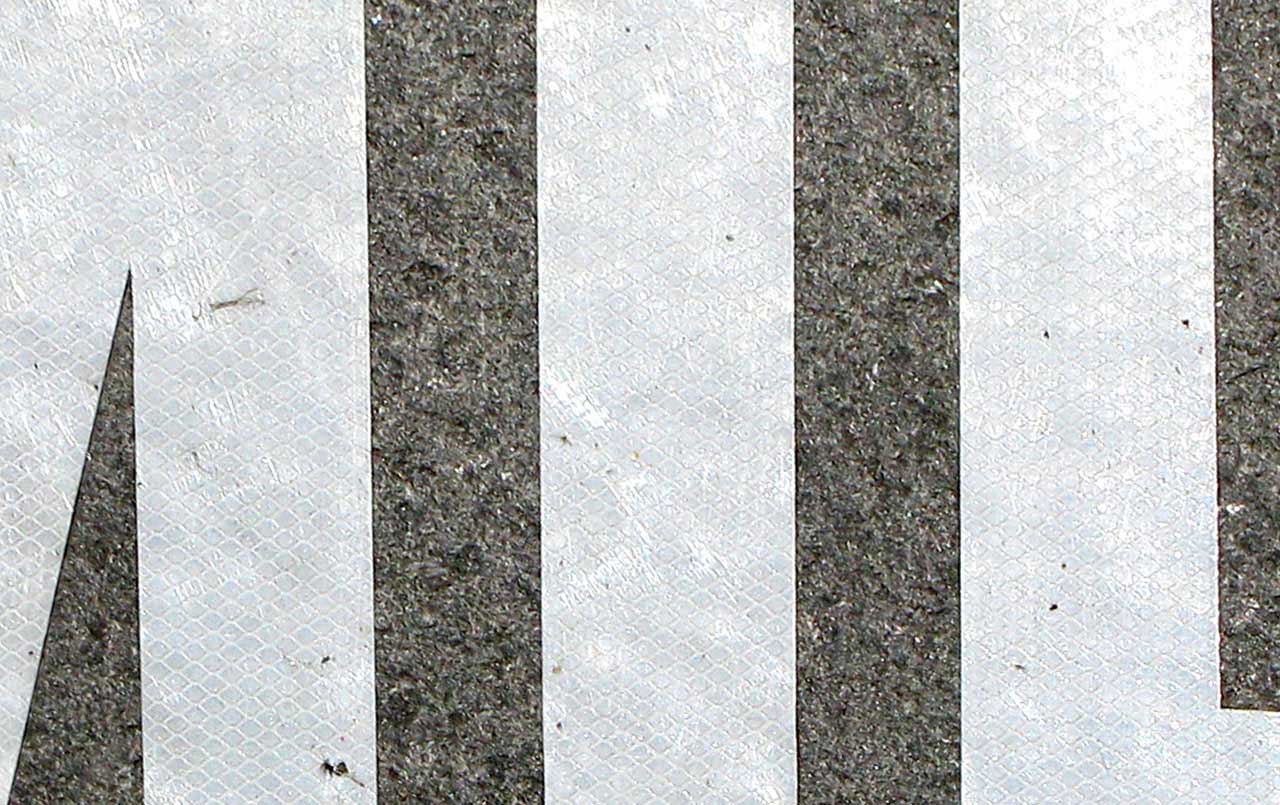 The intervention consists in the installation of the words in Greek Souvenir, Ruin and Monument. The words are made in white self-adhesive reflective vinyl. Each word will be stuck on one panel painted in black.

Each day the panels will be carried out to a different place in the city:

Once there, the panels is installed in a visible way inviting people who walk around there to chose one of the panels without giving them any other explanation.

Once they chose the word they are invited to hold up the panel. The action is documented by pho-tography.

The intervention analyze which is the people’s reaction produced by the words Souvenir, Ruin and Monument in a specific place and moment.

Obviously these three words keep a relation of meaning between themselves, but at the same time they can be interpreted and related in many different ways depending of who read them or which is the context where you find them.

In one hand the intervention brings out in which way, people with different realities feel themsel-ves as part of the society, showing their opinion about the society trough what these three words means or can mean.

Also the intervention tries to analyze the urgent need of human being to posses the image of them-selves in these places or near by these objects that mankind has determinate as milestones.

BE STUPID is an intervention consisting in the installation on the floor of the door of access to the projection room of The Anthology Film Archive of the sentence “BE STUPID BEYOND THIS POINT” made with the same reflective vinyl used in the traffic signs. The intervention was made during the festival YANS&RETO.

The festival YANS&RETO aims to be a cultural event that brings together artists YANS (Young And Not Stupid) and RETO (Radical Even Thought Old).

The piece starts from the concept given by the festival, defined by the organization in this way:

Youth are defined by stupidity and the old, by wisdom. However, this assumption might be misleading. If one defines stupidity by lapses of responsibility rather than by a lack of knowledge or ability, one finds that one doesn’t grow intelligent but simply grows older. Being “modern” and “progressive” is not related to being young, but to being responsible. Although nobody has the desire to be perceived as stupid, people are quick to use ignorance as an excuse for their misbehavior or lack of attention. In other words, stupidity releases you from thinking and repairing. In reality, stupidity is a deviation from what is ethical.

Often, art is a way to dig deep into to a culture. But also, often in art, stupidity is celebrated (this is my take with the use of the concept “emergent artists”). In addition to bringing creative people together, the purpose of the festival is to prove that artists can change culture. Often what is imported from a culture to another are clichés. Often Spanish art is represented either by kitsch or by copying other International artists, this the festival looks for artist who are international though Spanish.

The Festival took place in September 2010. At the same time the clothes brand DIESEL carried out its advertising campaign BE STUPID, in which they played with the same idea than the festival, but with very different objectives.

Any person who came to The Anthology Film Archive would have walked around the city full of posters, billboards and other advertising devices of the DIESEL’s campaign, encouraging them to be stupid in order to be more creative, to create more art or to have more success looking for sex.

The intervention wants to push the meaning of the word stupid in relation with art in a specific place and moment. To talk about the language and its ambiguity and perversity, by questioning the role of art in the society.

Home is a Site-Specific intervention that took place at the King’s Inn motel in Kingston, NY during September and October 2010, as part of Rena Leinberger’s project Optimism Packs.

In the 1980s, New York City began programs to depopulate its housing projects. Landlords in smaller cities up the Hudson River were provided with incentives to receive these tenants under Section 8 housing, while the towns were often not equipped to deal with the influx of urban poverty and social issues.

Kingston is one of those cities, with a population of about 30,000 people. Midtown, the most blighted neighborhood, is also where Rena Leinberger lives. She created the project Optimism Packs in which she invited various artists to do interventions on the outside areas of the King’s Inn, Kingston’s most notorious derelict building that until 2007 was a site of crime, drug-dealing and prostitution.

Home is an intervention that consists of covering the windows of room 217 with the silver selfadhesive vinyl provided in the Optimism Pack. The word HOME is cut from the vinyl, providing a negative space through which it is possible to look into the room.

Home up as a reaction to all this that it is still latent in the King’s Inn and that somehow put in evidence the incapacity of contemporary society, questioning the actual operating systems by reflecting about the definition of home granted by the wild capitalism to be elude then. The intervention brings us to our home to confront us then – by our own decision – to the consequences of a system that is not working and in which we take part.

The Walk of Fake is a Site-specific intervention made on Times Square in October 2010, during the Spain Art Fest 10’.

The intervention consist in the installation on the sidewalks of four sentences; “WATCH YOUR DREAMS”, “BE AWARE TO LOVE IT”, “BE AWARE TO SMILE” and “WATCH YOUR REAL FRIENDS” made with the same reflective vinyl used in the traffic signs.

The sentences will refer us to ideas associated with the cultural identity as well as slogans used in different ads that can be found if we continue our walk through Times Square.

In one way, the intervention wants to analyze the reality of lighting language found within the code of traffic signs by questioning their use and meaning. While in other way, this intervention questions the other lighting codes and their ways of working, to inspire social and political questions regarding current operating systems.

The intervention deals with the language used in advertisements that compound the urban landscape of the city, in relation to society’s strategies for identity generation.

ONESQUAREMETER talks about the contemporary art market system as well as questions the subjective way in which is set the price given to the art work.

The intervention consists of the installation on the floor of Espacio Líquido Gallery’s stand of a group of letters: O, N, E, S, Q, U, A, R, E, F, E , T, E, R . The letters are made of reflective vinyl used in traffic signals.

Is A group of letters, but the visitor can read something in it “One Square Meter”. And if they could measure the space occupied by these letters in the ground would find that also occupy 1m2.

When looking at this intervention we can see two things: the image of a reflective vinyl shining stuck in the floor of an art fair and a text composed of letters that can be read. The work is thus divided into two parts, one that can only be seen and one that can only be read. So the given infor-mation becomes more complex in an aesthetic sense. The text seen as an image and the image viewed as text confront and complement each other.

But do not forget that we are in an art fair and the work is on sale. The value of the piece is cal-culated without taking into account the subjective components of the same. The price will be the adition of the prize that the organization of the fair charge for the rent of the square meter that the piece occupies taxes included (a total of 270 €), plus the price of production of the piece (about € 100 approx a) a total of 370 €.

The selling price here does not correspond to a work of art, correspond to the value of a piece of reflective vinyl with form of letters stuck on the floor of a pavillion of IFEMA. In any case the buyer can have that object, only its existence until the end of the show, once the fair ends the piece is destroyed.

The buyer paid for an object that dissapiered, but actually wants to own something else, the idea that it is derived and represented by that object, something intangible, like air.

The buyer will receive a certificate of purchase and right of documentation. The document descri-bes the piece purchased. This is all that the buyer retains from piece, along with any documenta-tion it may did.

The language and its use are probably one of the epitome of contemporary Western society; the city is a meeting point and a generator of subjectivity. A language of codes controls this subjectivity and aims are make the city an understandable and practical place for its users.

Within this language of codes, those that use light have been the cause of a brutal competition for attracting citizen’s attention. Public space becomes increasingly saturated with different stimuli that have arisen and arise due to the development or "evolution" of society. The city is shown to us as a spectacle of image, sound and light; a confusion of messages, a spectacularized urban landscape that becomes the stage of reality.

Immersed in this mixture of codes we can find construction processes of urban identity and memory that exclude many more items than they select. A series of symbols and images emerge that shape the urban network of a society whose identity base is reflected more and more in what it consumes.

The city cannot be a city by itself anymore; she needs those stimuli to be and to become a reference point, to emphasize her, to be a sign between the other cities. The city is not lived in and built up anymore, but rather it is visited or consumed.

Brightext is a project that deals with the language and the stimuli that compound the urban landscape of the city, in relation to society’s strategies for identity generation. This project begins with the reconstruction of the scene that these two elements create, and extends through a play of changed meanings by developing interventions in public and private spaces.

In one way, the project wants to analyze the reality of the language use in the city by questioning their use and meaning. While in other way, this project questions other codes directly and indirectly attached to the language, to inspire social and political questions.